﻿The Malvern boys and girls track teams participated in the Sandy Valley quad with East Canton and Tusky Central Catholic (TCC) April 6 at Sandy Valley. Boys results The 4×200 relay team set a school record of 1:37.4 during the competition. The team is comprised of senior Adam Moser, junior Landyn Huffman and sophomores, Xavier Watson and Shane Rodgers. Moser placed third in the 100 (12.10), 2nd in the 200

Arianna Clayton wins three running events in first varsity competition ﻿Carrollton freshman Arianna Clayton won two events, placed second in another and was named the MVP of the West Holmes Knights Invitational Track Meet April 10 at Millersburg. Clayton won the 400M in a time of 1:01.23 and the 200 (26.72). She also placed second in the 100 (12.86). The Warrior girls placed fourth in the 17-team field. Highland won 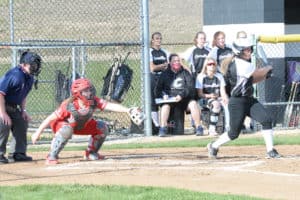 Offense explodes for seven runs in second inning ﻿By Carol McIntire Editor A seven-run second inning propelled the Carrollton softball team to a 10-0, five-inning shutout over Beaver Local in the season opener March 30 at the Carrollton Field of Dreams. Sunny skies and exceptionally warm temperatures greeted the team as they took the field for the first time since the 2019 season. “It felt amazing to be back on 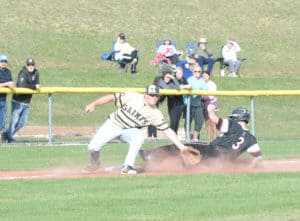 Strong offensive effort, aggressive base running add up to 13-3 win over Tusky Central Catholic ﻿By Carol McIntire Editor Opening day for the Carrollton Warriors baseball team looked more like the first day of summer than the last day of March as temperatures surpassed the 70-degree mark and sunglasses and shorts were appropriate attire for the game. The host Warriors gave the crowd plenty to cheer about as they blew 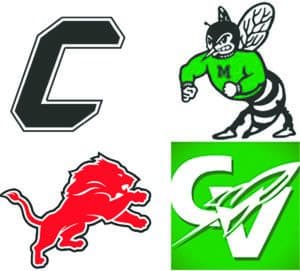 The Carroll County Messenger is featuring its annual Spring Sports Preview in the March 31 issue available on newsstands now. Find out what lettermen are returning, who coaches think are promising newcomers and when and where your favorite teams are playing. The preview features Carrollton, Conotton Valley, Malvern and Minerva teams. 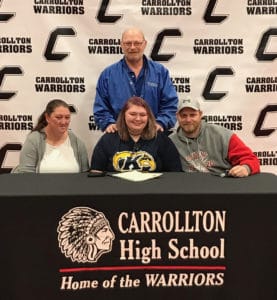 ﻿Carrollton senior Carenda Fowler signed a National Letter of Intent recently to bowl for the Kent State University at Tuscarawas Golden Eagles for her former Carrollton Coach Vera Fox, who now leads the Kent State program. Fowler is a three-year letter winner for the Warriors and bowled at Wayne Webb’s Columbus Bowl in the 2021 Division II state championships with the Warriors, who placed seventh. She is shown above seated 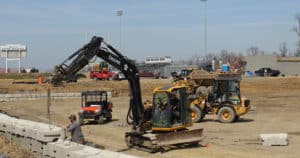 ﻿Plans to unify sporting activities at Edison High School are progressing and officials received the latest update on the project. Superintendent Bill Beattie informed school board members during the March 16 session that work was continuing on the new facilities, which will boast a fieldhouse and softball and baseball fields in addition to the football field that is already in existence. Leaders are also excited to utilize the new track

Can you help fill in the gaps? ﻿Carrollton High School Assistant Athletic Director Ron Colaprete is nearing completion on a comprehensive history of boys and girls basketball teams since the program’s inception in 1908 to the present time. “It’s taken quite a bit of research and time to put this together,” Colaprete noted. “Most everything is complete with the exception of some missing team pictures of both boys and girls 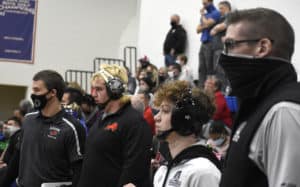 Burress, Carman stand at the state wrestling tournament ﻿By Leigh Ann Rutledge CCM Reporter The state wrestling tournament was heartwarming for one wrestler and heartbreaking for the other. Minerva senior Jarrett Burress and Carrollton freshman Josh Carman placed second and fourth, respectively in the 84th Ohio State Wrestling Individual Tournament. Both wrestlers left everything they had on the mat. Burress, a senior at Minerva, came into the tournament as a