By Carol McIntire, Editor Christopher Modranski won the Republican nomination for the Jan. 3 term of Carroll County commissioner in the delayed Ohio primary election April 28. Modranski defeated Donald Leggett II 1,402-1,257 in the only contested county race on the ballot and will face Democrat Tom White in the November general election. White, who was unopposed on the Democrat ballot, received 1,157 votes. A total of 4,298 of the

Carrollton basketball coach reveals award winners, recaps season Cancellation of the classes the remainder of the school 2019-2020 school year by Governor Mike DeWine last week left Carrollton winter sports teams which had not yet completed their seasons, without the opportunity to celebrate their success.Carrollton Basketball Coach Mike Aukerman is celebrating his players through a social media program and with recognition in news media.The Warriors finished the season with a 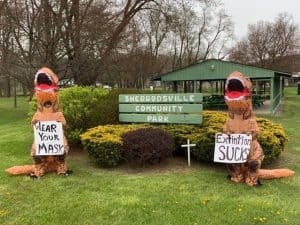 Tyrannosaurus Rex dinosaurs visited Sherrodsville Thursday to urge residents to practice safety measures during the COVID-19 pandemic.Armed with signs stating “Wear your Mask” and “Extinction Sucks”, the T-Rexes walked around Sherrodsville Park and visited employees and patrons at Unified Bank.Spreading the word are Alexis Booth (left) and Diane Fowler. According to Jennifer Booth, who provided the picture, Diane (Jennifer’s mother) wanted to dress up in the blow-up costumes. Alexis is 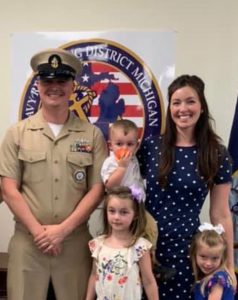 The Carrollton Farmer’s Market will open May 2 for the season in the parking lot at Carrollton Dollar General, Canton Rd., Carrollton.The farmer’s market will be open 8 a.m. to noon each Saturday through October.Only food-related vendors will be hand due to COVID-19. No crafters will be in attendance until a later date. Vendors will be spaced further apart and vendors will wear masks and gloves. No cloth table cloths 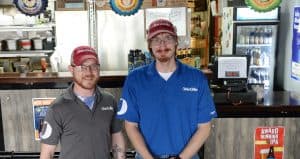 By Carol McIntireEditorWhen Tyler Barrett and Mitchell Galliher purchased the Ohio Grille in December 2019, they had no way of foreseeing what they would face just three months later.“When Governor DeWine and Ohio Director of Health Dr. Amy Acton made the announcement that restaurants could only serve take-out food, my first thought was Oh _ _ _ _!” Tyler said last week between serving customers at the 715 Canton Rd.,

By Carol McIntireEditorThe Carroll County Ag Society (fair board) is moving forward with plans for the 2020 fair.In light of coronavirus (COVID-19) pandemic, the 2020 Ohio county fair schedule remains in limbo. Governor Mike DeWine said during his April 21 press conference officials “will continue to evaluate how, and if, we can safely operate Ohio fairs in 2020.”Members noted during the meeting, which, conducted via teleconference with members sitting in

The news you want…from the people you know.